About The Palmers and Over the Hill Outfitters

SERVICE is what we’re here for. We are a small, family run outfitter dedicated to providing you with the best pack trip or hunt you can have at any price. We are father and son, Terry Palmer and Randy Palmer. Our base of operation is the Palmer Quarter Horse Ranch on the Florida River, near Durango Colorado. 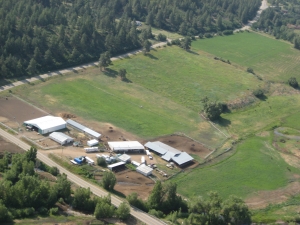 Aerial View of Palmer Quarter Horse Ranch and Over the Hill Headquarters.

The ranch has been in our family since 1952. Three generations of Palmers work together to keep the herd of over 100 horses thriving. We pride ourselves on having the finest horses anywhere. What this means to you is a horseback experience that is unequaled in both reliability and pleasure, and one that you will never forget. 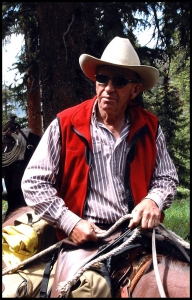 Terry Palmer has been involved with horses since he was a kid. He moved onto the Palmer Quarter Horse Ranch when he was 16 and has been breeding outstanding Quarter Horses since 1960. His first horseback adventures took place in Southwest Colorado’s Weminuche Wilderness, where Over the Hill Outfitters now operates. His fish stories of catching 150 trout on a bare hook while lying in his sleeping bag next to the lake originate here. Hunting also brought him into the woods every fall in search of wapiti. Terry knows this area intimately, and with his experience and wonderful sense of humor he will make certain your trip with Over the Hill Outfitters is fun and memorable. Terry was recently awarded for 30 years of breeding Quarter horses by the Am. Quarter Horse Assoc. He is actively involved in the Durango community as a board member of the Four Corners Cutting and Reining Association and the Florida Water Conservation District. 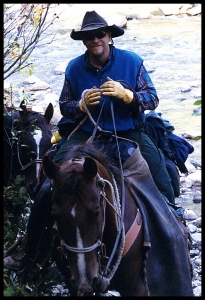 Randy Palmer on Shooter Somewhere in the Weminuche.

Randy Palmer was born in Durango and also grew up around horses. The route that Over the Hill Outfitters uses today is the same one that Terry took the family on when Randy was six years old. Randy’s first ‘solo’ pack trip into the Weminuche took place while he was a sophomore in High School. He was active in rodeo, roping calves and team roping and went to the National High School Rodeo Association Finals in 1980 and 1981 in cutting. He also was a member of the Colorado State University rodeo team from 1981-1983. His undergraduate college education culminated with a BS in Physics, leading to employment at Los Alamos National Laboratory in New Mexico where he did his best to keep track of nuclear material to help stop the proliferation of nuclear weapons around the world. At the University of Oregon at Eugene, his interest in mountains led him to studying earthquakes and the history of the Western United States, earning a Ph.D. in Geophysics. He couldn’t shake his desire to be out in the wilderness and hired on at Bear Basin Ranch in Westcliffe, CO, where he guided pack trips, mountain biking, rock climbing, and ascents of the Crestone Needle, a prized Colorado Fourteener. He guided elk hunts in the Sangre de Cristos and deer hunts in the Wet Mountains. Finally, after running the outfitting business for ten years, he is making time to once again train some of the reining, roping and cutting bred quarter horses that are bred and raised on the Palmer Quarter Horse Ranch.

Terry and Randy knew John Neely, the former owner of Over the Hill Outfitters. John guided trips and hunts in the Weminuche Wilderness area since 1972 and was ready to let someone else take over. One thing led to another and in March 1998, Terry and Randy took over with John as a consultant and hunting guide. We are proud to continue providing the same high-quality service that John Neely offered to his clients for more than 25 years.

Over the Hill Outfitters, Inc. is a member of the Colorado Outfitters Association, the Rocky Mountain Elk Foundation, Safari Club International, the National Wild Turkey Federation, and the Durango Area Tourism Association.